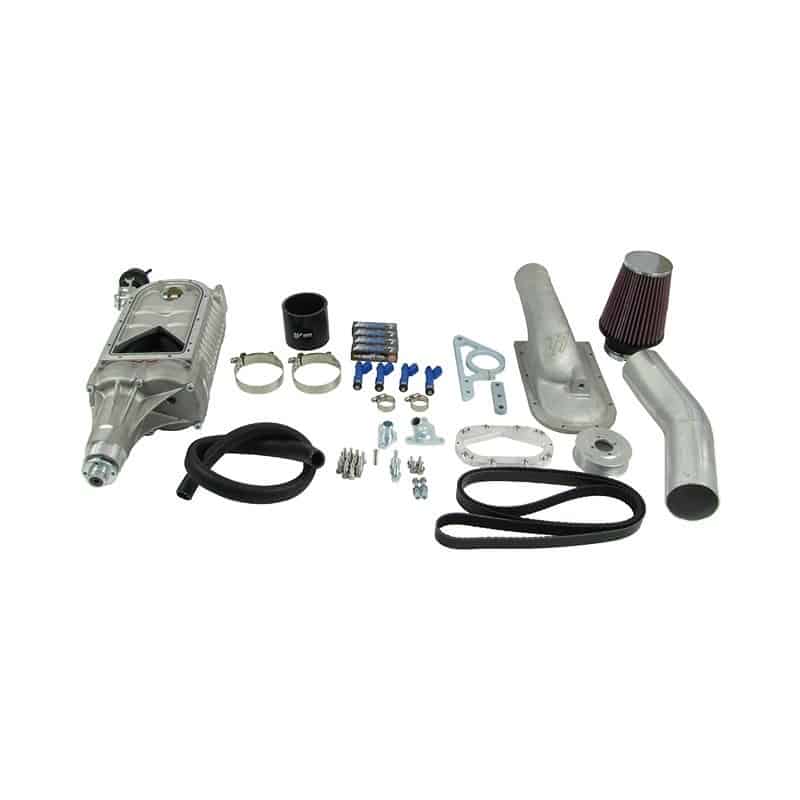 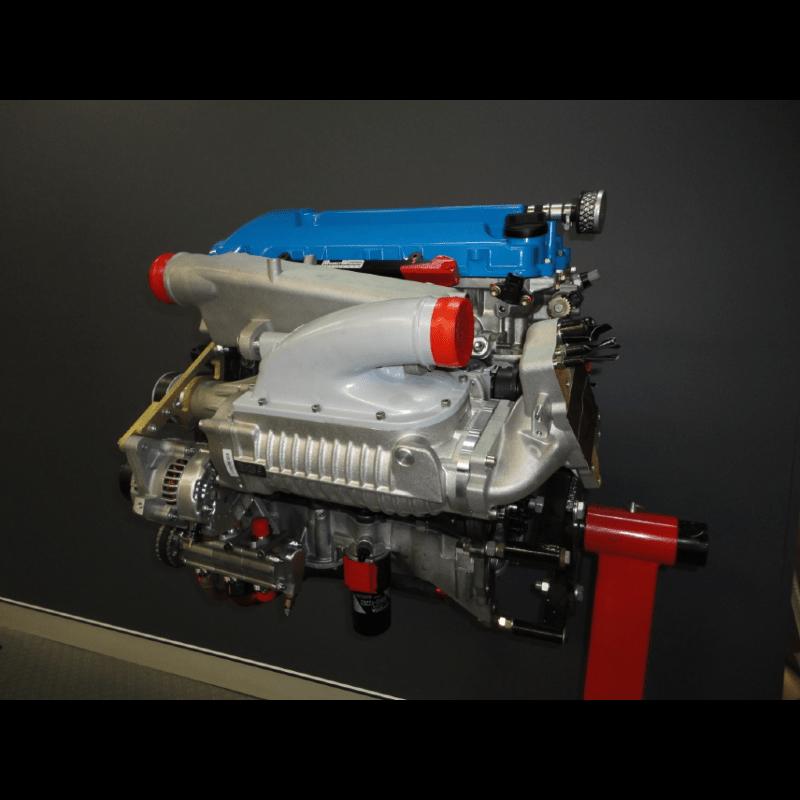 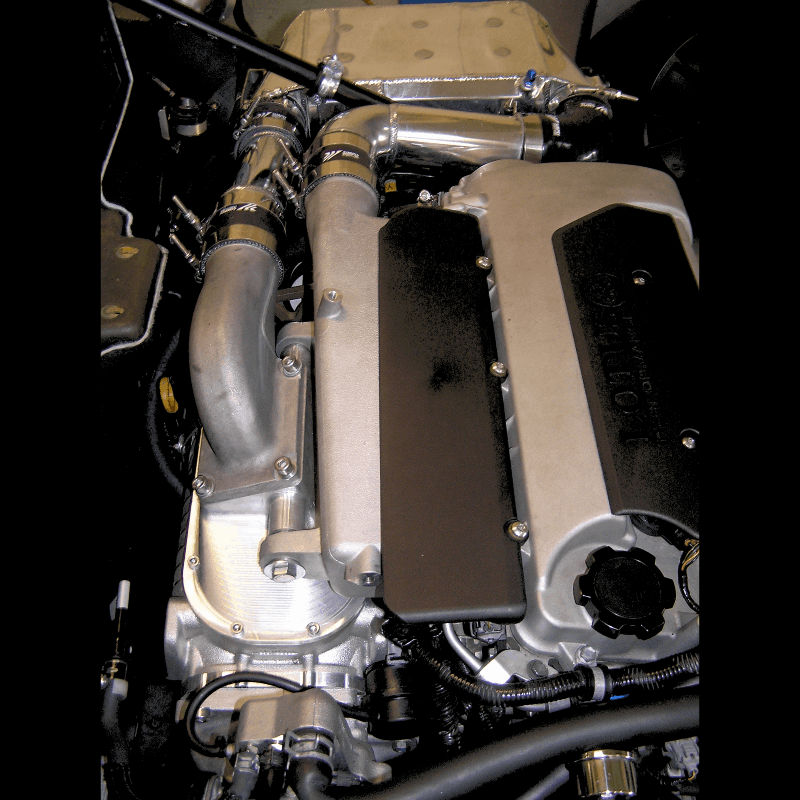 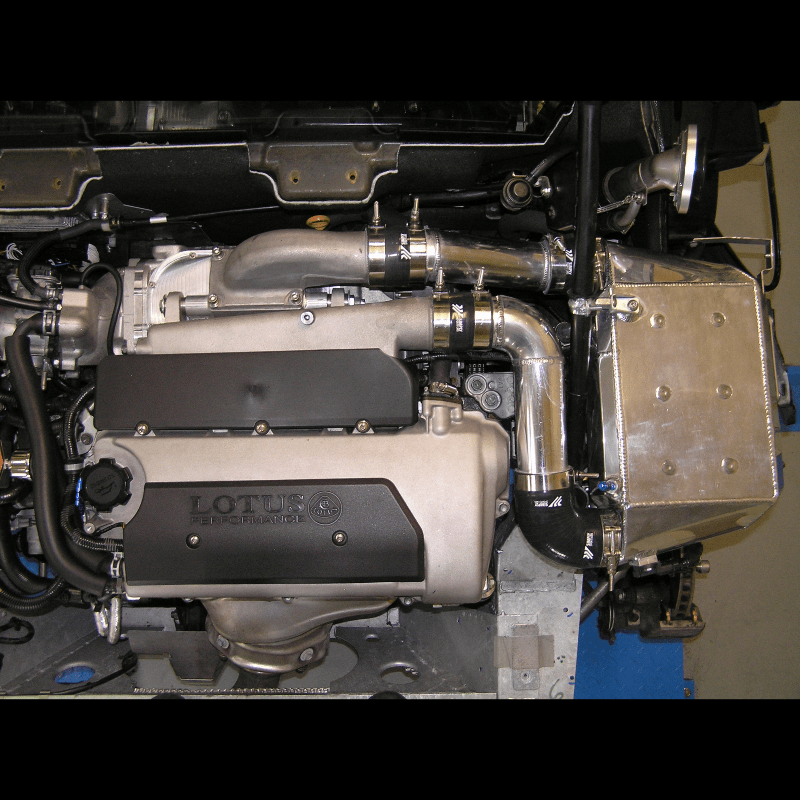 The Simply Sports Cars TVS 1320 Upgrade Kit is designed to work with existing supercharged Lotus Elises and Exige and replaces the current components. Pricing starts from $4760 and will vary depending on the specification suitable for your application.

Engine upgrades for Elise or Exige

There are supercharger kit upgrade options available for an Elise or Exige to improve the performance of the factory fitted supercharging system. If you’ve been thinking about upgrading your engine’s power, your vehicle’s overall performance then this is an ideal choice. Quite often owners of Elise and Exige will upgrade their supercharger but also look at things like improving the brakes, suspension & other performance orientated components, especially for track use.

The Simply Sports Cars automotive workshop in Sydney or Melbourne can provide advice on what parts are suitable for your vehicle & intended application. We can then also install, set up & help you test your revised vehicle configuration with our support services either at our workshop or trackside to ensure you get the most from the work done to your vehicle

The Simply Sports Cars TVS 1320 upgrade kit is designed to work with existing supercharged Lotus Elises and Exiges. It replaces the current components with superior SSC and Harrop HTV1320 components. The kit includes;

Where is our kit available & what choices are there?

As mentioned, this supercharger kit has been designed for Elise or Exige vehicles with the 2ZZ engine, we can provide shipping across Australia or Internationally so that one can be installed. We have done all the work to ensure kit compatibility with a wide array of models.

We we have some variations to the components depending on the exact vehicle model, intended usage & the state of the vehicle. We will typically need to know

Learn more about the science of supercharger fluid dynamics

Without going into the complex details of fluid dynamics it’s important to understand one of the critical concepts of how a supercharger increases power. At the heart of the system the rotors of the supercharger flow air fed in from the intake and deliver an increased volume of compressed air to the engine. More air requires more fuel, resulting in a bigger bang which increases power.

Sounds simple enough, however there is a downside. The supercharger requires energy to compress the air and not all of the energy consumed goes into processing the air alone. Unfortunately a by-product of compressing the air is the generation of heat. Fundamentally this hot air is less dense than cold air and therefore the less dense the air is, the less fuel you can inject which ultimately means less power. In simple terms every degree of heat that the intake air increases, leads to a reduction in horsepower and, to make things worse, hot air into the engine also increases the chances of pre-detonation.

What our engineers discovered about supercharging

At SSC we have raced Toyota powered Exiges at the highest levels in Australia in various naturally aspirated and supercharged configurations. We knew all along that the MP62 supercharger which was chosen by Lotus for fitting in its supercharged models had efficiency issues with the heat generated from the charger, however this became no more apparent then when we turned up to the Bathurst 12 hour endurance race with a production supercharged Exige after running a normally aspirated car the previous year with the same drivers and similar track conditions and not lapping any faster!

Looking at the data collected it was clear that there was a fundamental flaw with the system and looking at the plot of manifold pressure against RPM overlayed on top of the MP62’s efficiency map tells the story perfectly. The supercharger is operating almost completely outside of the dark blue “Efficiency Island” and as engine RPM increases the plot is almost off the chart! Put simply this means the charger is as good a heater as it is a compressor at this point. 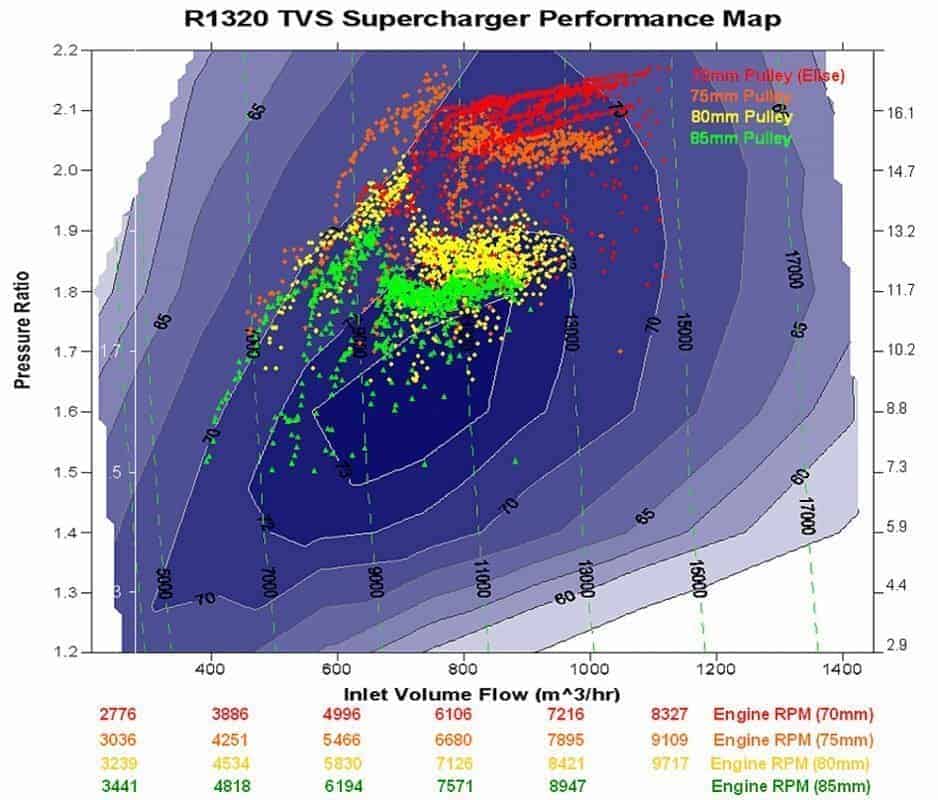 How we improved this supercharging scenario

After toying with the idea of various configurations of cooling systems to keep the intake air temperatures under control we decided to tackle the problem at its root and replace the supercharger completely. Harrop Engineering’s new series of roots style supercharger, the Harrop HTV1320, was chosen. Based on EATON’s Twin Vortices Series (TVS)™ of 4 lobe rotors this charger delivers a greater thermal efficiency, pressure ratio and greater volumetric capacities at a larger operating window. In layman’s terms this means greater efficiency at a larger operating window. After developing prototype kits to test on cars running in the Australian GT Championship the results were nothing short of astonishing. In comparison to the efficiency map of the MP62 above its clear that the Harrop HTV1320 is operating about as close to the maximum efficiency as you could hope for!

What supercharging improvements were made?

After much analysis we found that in demanding conditions the Lotus factory supercharger solution was losing between 15-20% of it’s power after just 5-6 mins of track use. This proved extremely detrimental in a competitive racing environment… therefore the TVS solution was born. Not only do we now have all of our available power for all of the time, we also found a lot more of it.

We are seeing increases of 40-50% more power on stock engines and experiments with some engine internals have shown that 80-90% power increases are reliably achievable. We’ve made a big effort not to get caught up in a manufactured BHP figure marketing campaign and therefore you will not see figures quoted here. Instead we have been much more proactive and actually used and tested the cars in the exact environment (maybe a little harsher at times!) that you will be using your car in. Below are some of the outcomes: 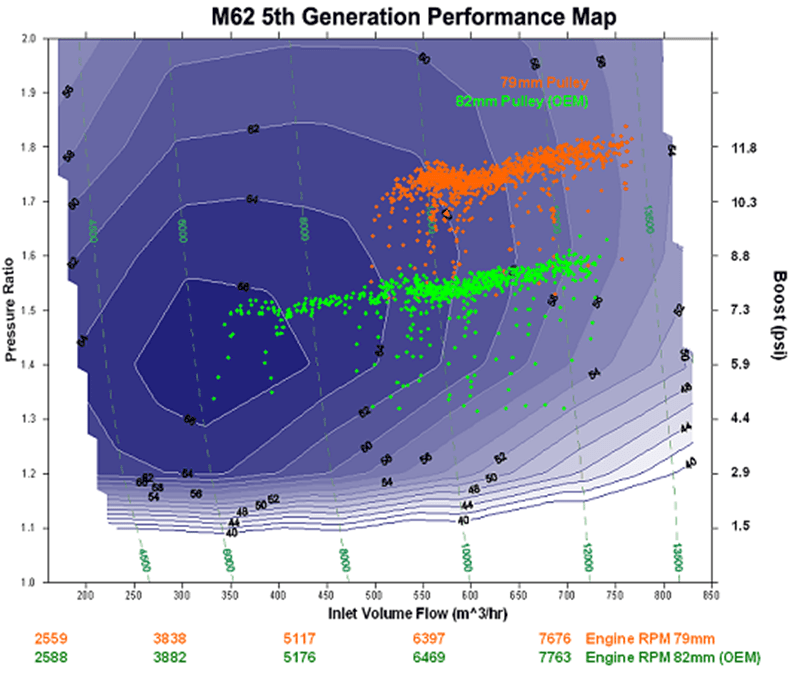 Why cooling is also important to consider

Despite the Harrop HTV1320 being much more efficient than the MP62 a cooling system is still required. To reduce heat to an absolute minimum we have packaged a very effective cooling system to cool the charged air whilst also fitting within the confines of an Elise body. To achieve effective cooling of any system on a car adequate airflow is required, which essentially ruled out the use of an air over air intercooler since the only place on a car that sees significant airflow is the front.

A charge cooler mounted above the right hand rear wheel arch was developed in conjunction with a front mounted radiator which is packaged away from the hot engine water radiator and placed neatly underneath the crash box. This requires a hole to be cut in a non structural portion of the crash box and a scoop to be bonded in above the hole to duct cool and unobstructed air downwards. Topping off this system is a Bosch motorsport pump which is easily up to circulating the water through the entire system. 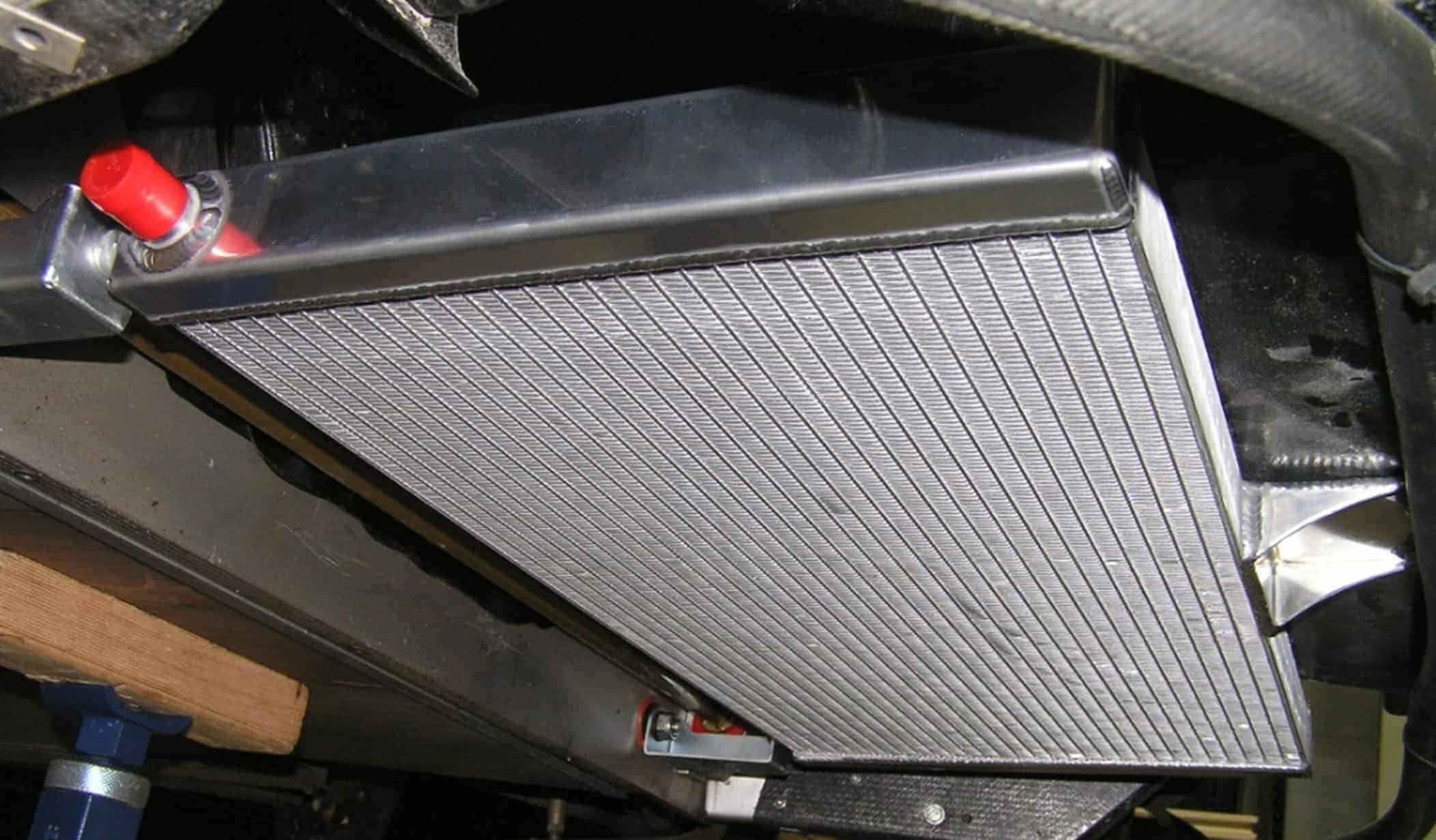